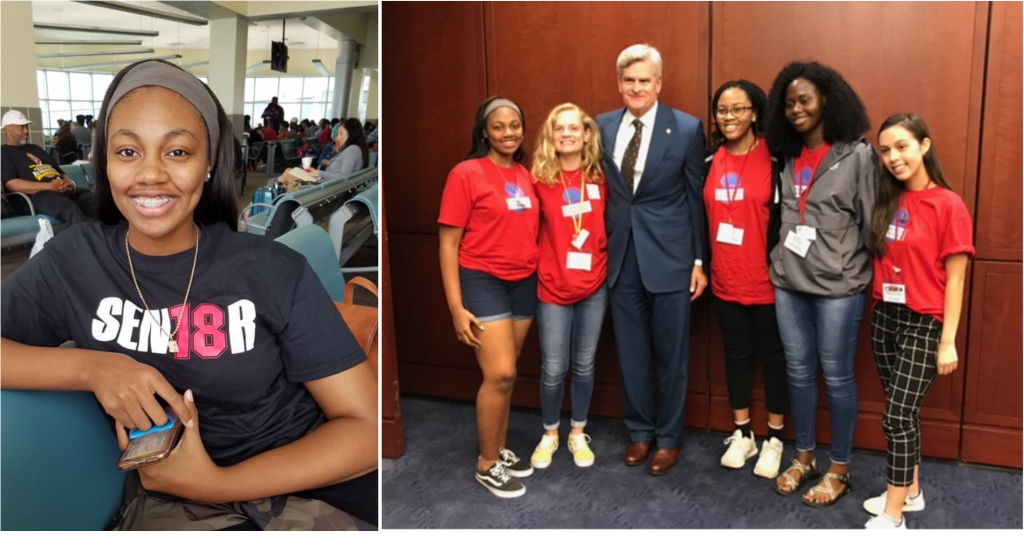 (Baton Rouge, La.) — Brea Miles, an alumna of Urban Restoration Enhancement Corporation’s College & Career Ready Pre-Law Institute recently brought her tenacity and leadership to the U.S. Capitol to learn about advocacy during the American Civil Liberties Union (ACLU) Summer Institute, which hosted youth from across the nation.  Brea, a senior at Lee Magnet High, shares her experience below.

A:  The purpose of the event was to educate young leaders on the issues in today’s world and to teach us what it means to advocate. I stayed in Washington, D.C. for two weeks and learned about issues that are impacting communities nationwide.  The one thing that really stuck with me was the idea of racial discrimination. I learned how things still aren’t perfect in the world especially for people of color. I learned about racial injustice, mass incarceration and the need for equal representation.

Q: What types of issues did you and your peers address during the ACLU institute?  In what ways did you communicate or address these issues?

A:  We picked topics that we wanted to speak on such as: how lower income people are disproportionately harmed by bail systems; prison reform and ending solitary confinement; rights for individuals with disabilities; combatting  biased enforcement of school dress codes and other issues.  I spoke on how school dress code regulations such as no braids or having a certain hair length seem to be directed towards those of color.

Q:  What did the program teach you about civic engagement?

A:  It taught me to never be scared to voice my opinion especially as a young woman who has to grow up in this world. I have to make things right because I am the one who is growing in the environment now.

Q: What was your most memorable moment from the program?

The most memorable moment was meeting U.S. Senator Bill Cassidy. He spoke on his views. We spoke on the  Muslim ban and separation of immigrant children. Later that day, we stood outside the U.S. Capitol for hours, in the rain, to advocate for our stance that “All Families Belong Together.”  We chanted on how we believe ICE should be disbanded and how immigrants are allowed because “nobody is illegal.” This impacted my life greatly because without this event, I believe I would have never had the courage to meet with my senator, present the issues I have, as well as advocate for the issues I believe in.  I will forever remember my first rally and how we argued that everyone is allowed, and families belong together.

Brea Miles is an alumna of UREC’s College & Career Ready Pre-Law Institute—an after-school intensive that introduces high school students to civics, law and the criminal justice system, while studying under the auspices of pre-law instructors at Southern University Law Center. In 2018, Brea was named to the American Bar Association’s Civic & Law Honor Roll  for her participation in UREC’s College & Career Ready Pre-Law Institute.