Stantec, a Baton Rouge engineering and design firm, recently extended a full-time internship opportunity to Elvis Richard Jr.  Richard is a senior at Scotlandville Magnet High School and aspires to be an engineer.

Richard was first introduced to Stantec through UREC’s North Baton Rouge Youth Development Program (NBR) two years ago. Through the NBR program, he was afforded the opportunity to job shadow and receive direct professional mentorship from engineers at Stantec.

The exposure has resulted in significant growth for Richard, who says he is more disciplined and serious about his future as a result of the opportunities he has received.  He also has great respect and appreciation for his Stantec mentors for pointing him in the right direction.

“It builds you up. It motivates you to be successful because I wasn’t on the right track,” Richard said of his Stantec opportunities.

As a result of the experiences, Richard improved his presentation and technical writing skills.  He also leveraged his NBR experience to grow his relationship with Stantec.

This summer, Richard transitioned out of the NBR Youth Development program to accept a full-time internship at Stantec. He assisted with the I-49 Connector Project, which will connect I-49 from Lafayette to New Orleans, and was primarily responsible for reviewing traffic safety and crash data that will provide insight for the design portion of the project. 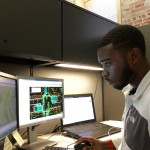 “This project in particular is probably one of the largest projects ever done in Louisiana,” said Cains, noting that the project has federal recognition from the U.S. Department of Transportation and is recognized as a priority project in the Southern region.

“From Elvis’ standpoint, he can go back and say NBR is one of the stepping stones he used to be involved in this project,” Cains added.

Richard agrees, and said he looks forward to adding the experience to his resume. “It’s been a real, great experience here,” Richard said. “I really wouldn’t have had the experience without the NBR program.”

“Elvis’ growth and success with Stantec fully capture the purpose of the North Baton Rouge Youth Development Program,” said UREC President & CEO Emel Alexander. “While we didn’t want to lose Elvis as an NBR participant, we were excited to see him maintaining professional relationships that will prepare him for his future career.”

At Stantec, “Design with community in mind,” is a standard, as the company strives to be an integral part of the community. Stantec promotes organic growth, and many of its employees at the Baton Rouge office started out as student workers similar to Richard.