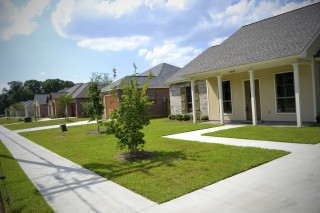 Urban Restoration Enhancement Corporation (UREC) has been named an award recipient of a $35,000 Community Revitalization Award. The award is administered and granted by the Greater New Orleans Fair Housing Action Center’s (GNOFHAC) Baton Rouge Community Revitalization Fund. Proceeds from the award will be used to enhance housing features in the Urban Gardens neighborhood.

In 2009, UREC began the development of Urban Gardens—a community of 21 single family residences for first-time homebuyers at the redeveloped site of the former Hollywood Elementary School in North Baton Rouge. In its redeveloped form, Urban Gardens provides spacious and modern single family dwellings for homebuyers and offers the first newly constructed homes built in the area in more than 50 years.

The subdivision’s site plan was prepared by the Southern University School of Architecture and encompasses 21 single family residences. The project is currently in Phase II of development; twelve homes have been completed.

GNOFHAC Executive Director James Perry said: “In partnership with the National Fair Housing Alliance, and Wells Fargo, we are excited to provide this grant to the Urban Restoration Enhancement Corporation. It is no secret that Urban Restoration Enhancement Corporation’s commitment to providing affordable homeownership opportunities to families in Baton Rouge is unparalleled.”

UREC President & CEO Emel Alexander said: “We have a unique community development model and concept that transforms urban communities and empowers families to take ownership by becoming homeowners. Support from organizations such as the Greater New Orleans Fair Housing Action Center strengthens our mission and work.”

As a nonprofit community development corporation, UREC transforms communities by investing in people and restoring neighborhoods. UREC’s promotion of affordable and fair housing enabled it to secure the GNOFHAC award.

The GNOFHAC Community Revitalization Grant is the result of an agreement between the U.S. Department of Housing and Urban Development and Wells Fargo Bank, N.A. The agreement resulted from a federal housing discrimination complaint originally filed by the National Fair Housing Alliance (NFHA), GNOFHAC, and 12 other fair housing organizations around the country. The complaint alleged that Wells Fargo-owned properties in white neighborhoods were much better maintained and marketed than homes in African-American and Latino neighborhoods, which would be a violation of the Fair Housing Act.

To learn more, about Urban Gardens homeownership opportunities, contact UREC at (225) 356-8871 or info@urecbr.com.

Posted in Newsroom
« BACK
NEXT »